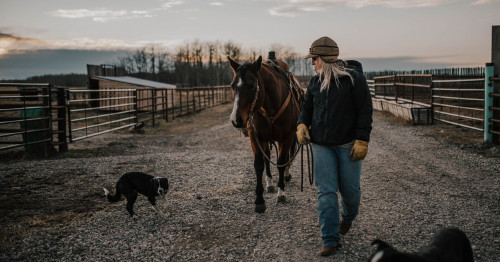 There’s more than one kind of branding going on at the MGM Cattle Company, and that’s just the way Meghan Marshall likes it.

She’s a busy Mom and ranch hand, but throws her own unique enterprise into the mix, to make for a full and varied life she wouldn’t trade with anyone.

The family’s livestock brand is the running M symbol, but the Running M Brand has also come to represent Marshall’s own business, and her social media presence, sharing their family’s story of being part of Alberta’s beef business.

Meghan and her husband Garnet have some 800 head of cattle around the ranch. They’ve created a real market niche by calving out 500 heifers each spring, then selecting and selling the most suitable mother cows in an annual December bred female sale. That’s alongside having their own cow herd, plus Garnet works at his family’s Marshall Feedlot, just outside Bowden.While Meghan had grown up near High River in a rural lifestyle, she wasn’t directly involved in ranching. But her horse passion led to high school rodeo and roping, and then on to Olds College, where she earned an applied agriculture degree. That’s also where she met Garnet, who was active on the rodeo team as well.

“He’s just a natural with a rope,” says Marshall.

While it’s up for debate about who caught whom, the two wound up together in ranch life.

As they were establishing their cattle operation, they were also building their family, at a breakneck pace. Their three daughters were born within three years. And that meant Meghan spent a lot more time indoors than she was used to.

“When the kids were little, and I was stuck in the house, it felt like the same day over and over again,” she confesses. “Diapers and milk and cleaning dishes and doing laundry, and you feel everything you were doing was getting undone, within minutes!”